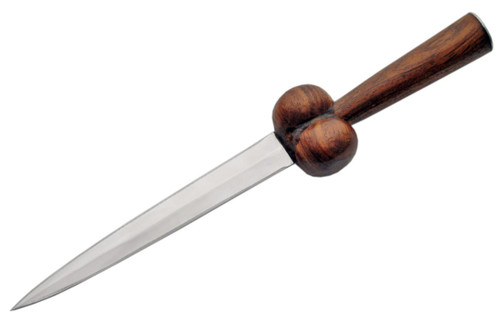 This 12" Bollock dagger has a wood handle with the distinctive "lumps" protecting the hand. It comes with a leather sheath.

A bollock dagger is a type of dagger with a distinctively shaped shaft, with two oval swellings at the guard resembling male testes ("bollocks"). The guard is one piece with the wooden grip. The dagger was popular in Scandinavia, Flanders, Wales, Scotland and England between the 13th and 18th centuries, in particular the Tudor period. Within Britain the bollock dagger was commonly carried, as a backup for the lance and the sword. A large number of such weapons were found aboard the wreck of the Mary Rose. The bollock dagger is the predecessor to the Scottish dirk.