But first you need to know where we come from.

Renstore.com has been active in the Renaissance industry for more than 25 years. The company was started by Jake and Gael Stirler as Chivalry Sports Videos in October of 1991. They started with just one video about the SCA called "Once Upon a Weekend" on VHS. They then published a small mail order catalog. This in turn led to selling videos for Belly Dance instruction and audio tapes of filk music and a few other things. In a short time they added a few articles of clothing, belly dance jewelry, and books. Four years later they created the first online catalog for Medieval and Renaissance Clothing on AOL. When they moved from AOL to the current domain, the name of the online company was changed from Chivalry Sports to Renstore.com because it was easier to spell. Jake and Gael continued to upgrade and grow the company until they they decided to retire in 2016.

BUT DID YOU KNOW?!

The company was purchased by an employee Russell MacDonald (Ciaran Galloglass) at the beginning of 2017. Russell has been a member of the SCA for 8 years and squired to Jake for most of that time. He initially came from an Aerospace Engineering background, graduating from Embry-Riddle Aeronautical University in 2006. He worked as a Prototype Design Engineer for 4 years but found that owning his own business was more suited to his taste. He co-founded an air-soft field, Toxic Air-soft from 2008-2012. During that time he also owned a Farmer's Insurance Agency. In 2014 he decided he would rather have the freedom to make his own hours again and freed himself from the desk. He became an ADOT inspector which allowed him to travel and meet all kinds of wonderful people. 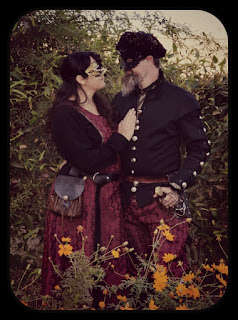 In 2016 the founders of Renstore.com decided to retire. Russell bought Renstore.com and moved to the Phoenix area after marrying Cassandra, his best friend of 16 years. They now co-own and run Renstore.com where they are hard at work designing new product lines and growing Renstore.com.

Connect with us on all our social media sites and follow our blog weekly. We would love to hear from you!